Just added to your cart

The big four fashion weeks are now being broadcasted instantaneously through Instagram, on websites such as nowfashion.com, or through live streaming, all of them irreversibly changing how fashion is seen. Runways in Paris, Milan, London and New York are starting to lose their exclusive mystique since the democratisation of access in the digital era, and it looks like we’re all in the front row!

But the fantasy lives on with brands that host runways at the world’s most elusive and exotic locations, in a bid to outplay each other. We look back at the last two decades of truly spectacular runway locations, from a Marrakech palace to the Great Wall of China. Here, in no particular order, are seven of the most exciting.

Channel's resort show in Cuba in 2016 was the first such event of its kind since the communist revolution on the island state. The French fashion brand turned the old Havana boulevard Paseo del Prado into a runway, with floodlights to the centre as models sashayed down the closed-off thoroughfare. Among the VIP audience of more than 500 were members of the Castro family, supermodel Gisele Bündchen, and Hollywood A-listers Tilda Swinton and Vin Diesel. Tickets were hard to come by, but lucky local residents could view the spectacle from their balconies along the boulevard.

Fendi’s Show on the Great Wall of China The near-legendary Fendi show on the Great Wall of China Against a stunning sunset, models filed out of an ancient guard tower onto the illuminated catwalk, strutting down the Great Wall while clad in Lagerfield's latest Fendi womenswear range. This collection was all about structured, chic gowns and outfits in black, white and bright red – the latter Chinese culture’s most auspicious colour. Thirteen years ago, this fashion show at China’s most famous historical site was a pioneering event in fashion and an early ode to the country’s luxury- obsessed economy.

Reports that the whole affair cost about US$10 million to produce would make it one of the most expensive, opulent shows ever staged. The extravaganza was not only a massive feat of technical precision, but also required lengthy negotiations with the government for permission to turn the ancient defensive wall into a runway for the day. Zhang Ziyi, Thandie Newton and Kate Bosworth were among the famous names who made it to the 500-guest event. Lagerfeld was ahead of his time and the show one of the most impressive of the last 20 years.

Within the palace’s terracotta walls, Dior paid homage to the African continent through craft, fabrics and form, with the French luxury label commissioning and collaborating with a handful of artist and fabric- makers from the region for the show. The starlit evening was one to remember and culminated in a performance by singer Diana Ross.

French designer, Pierre Cardin, was inspired by the West-to-East journeys of Marco Polo when he took it upon himself to host a fashion show in China’s Dunhuang, an in important oasis city along the Silk Road in Gansu province. For his spring/summer 2008 collection, Cardin sent out an eye-watering 200 looks, ending with a model in a wedding gown riding down the desert “runway” on camelback.

The exotic locale inspired a collection that was characterised by three chapters: Venice, the Silk Road and Xanadu, the former capital of Kublai Khan. Cardin, who was already 85 years old at the time, wanted to envision the blend of Eastern and Western cultures and the dia- logue it created hundreds of years ago during Polo’s time. 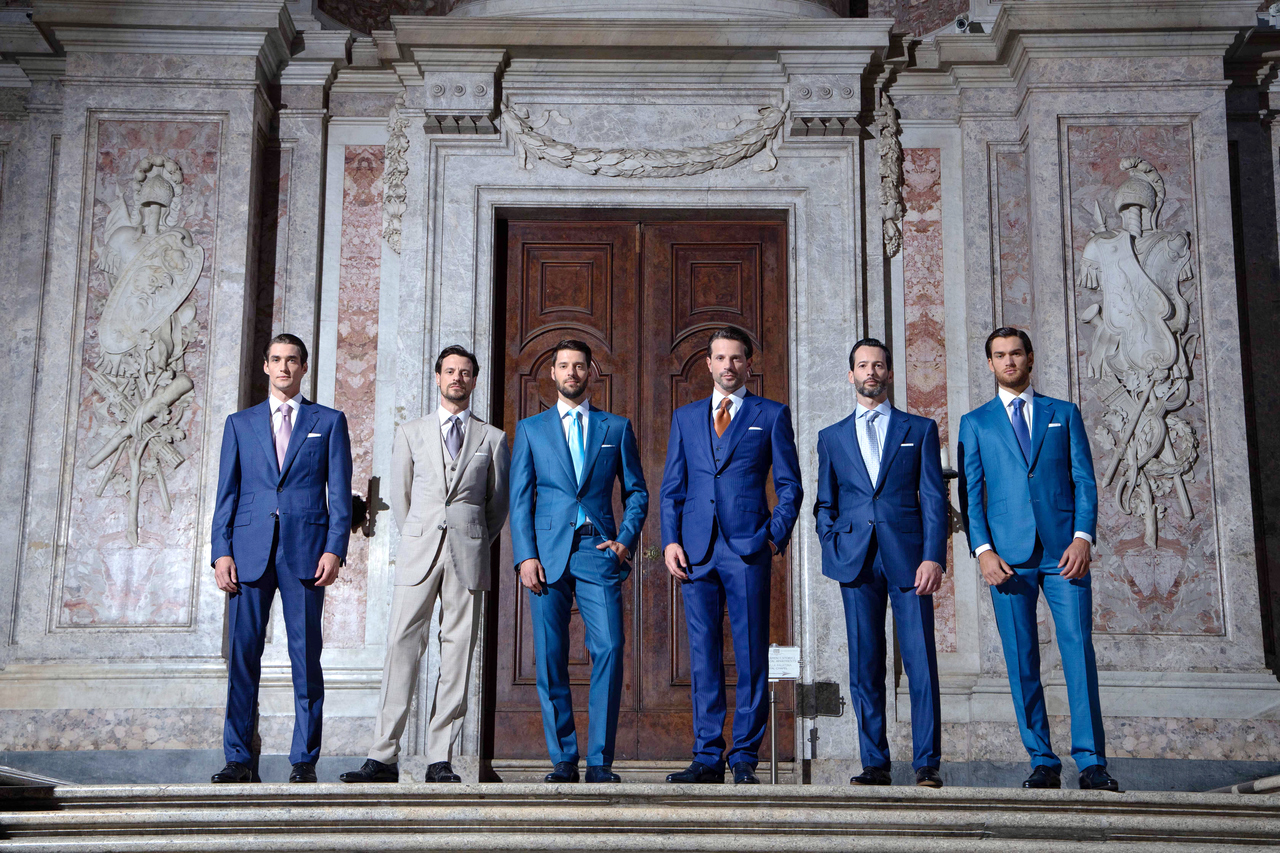 Held in the summer of 2019 at one of Europe’s largest royal residences, the spring/summer 2020 presentation was a coup for the Florentine men’s luxury and fashion label. In terms of audience size versus the sheer scale of the venue, this has to beat them all. I was there in May 2019 as part of an intimate group of just 40 journalists, VIPs and opinion leaders gathered for the colourful presentation, which was followed by opulent cocktails and dinner in front of the Fountain of Diana and Acteon, its sensual statues lit up for the evening as backdrop. Founder Stefano Ricci and his sons Niccolo and Filippo again showed their passion for their native Italy.

The sprawling royal palace of the Reggia di Caserta is enormous – the largest palace on Earth in terms of volume, it’s designed in a spectacular multi-directional plan; now a Unesco World Heritage Site, it was a royal residence during the Kingdom of Two Sicilies. Models were waiting at the top of the Grand Staircase of Honour as guests made their way up; the latter were then escorted by horse-drawn carriages to cocktails on the park lawns. Sumptuous tailoring, an ocean of shades of blue with several bolts of bright summer hues – the line celebrated Stefano Ricci’s unapologetic masculinity.

Dolce & Gabbana Alta Moda at the Valley of the Temples

It’s hard to outdo Dolce & Gabbana when it comes to super shows. The controversial Italian duo had made spectacular locations their thing since launching the Alta Moda couture line in 2012 in Taormina, Sicily in front of Naomi Campbell, Scarlett Johansson, Stephanie Seymour and Italian cinema stars Monica Bellucci and Isabella Rossellini.

The island of Capri, a Venetian palazzo, a Sicilian villa, the Teatro della Scala in Milan and the designers’ private Portofino cliffside villas have all been Alta Moda show sites. Last summer, millionaire and billionaire clients and press from around the world took in a show, Grecian in theme, staged at Sicily’s Valley of the Temples near the town of Agrigento. The Doric-style temples are spectacular monuments of Greek art and architecture. This couture was fantastical, as always – sensual draping in whites, sands and golds made for goddess outfits befitting a venue that was built thousands of years ago. The French luxury giant, Louis Vuitton, has the heft and budget to dominate the super-show game. Its wondrous 2016 Cruise show at the Bob Hope Mansion in sleepy Palm Springs wasn’t so much a feat of geographical ingenuity as the showcase of a wonderfully fluid collection by Nicolas Ghesquière within sweeping space-age architecture. Designed by John Lautner, famed for his mid-20th-century futuristic houses, the building was on the market last summer for US$25 million.